Get Job alerts by email

Sometimes It Takes Something Major to Happen to Give You Perspective

For those that know me well, they know it’s not like me to open up and communicate part of my personal life in a public forum such as this. However, I really wanted to share my experience so others could learn from it. Here I go…

Sometimes it takes something major to happen, to give you a greater perspective on life.  I was no different. A couple of years ago, I suffered a major back injury. It happened almost instantly and it was a serious hindrance to my life. I was always so active with endless energy to burn. I had a love for running, riding and swimming. So ‘pounding the pavement’ in the early hours of the morning most days before work, gave me balance and was a way to prepare and plan my day before my family woke up. Life was busy (and still is)! 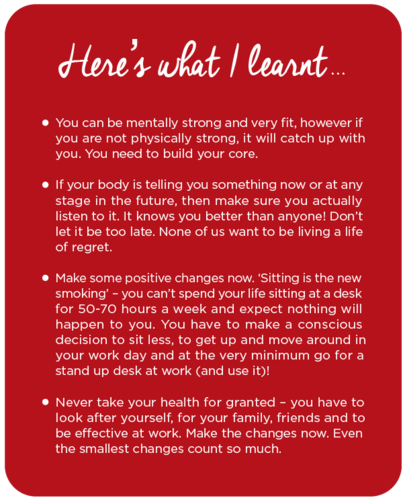 Then, all of a sudden, my body started to ache in differing places and my lower back became increasingly sore. If I am honest to myself, I had a feeling my body was telling me something, however I completely ignored all the signs and just kept pushing through. Then within weeks, my back just went, as did my neck. I could no longer sit, tackle/play sport with my children, pick up anything from the floor, drive or basically do anything active at all. For the first time in my life I found myself lying horizontal on the couch. I was in shock at how immobile I had become and I had to deal with the news from the specialists that I was in for a long journey ahead.  All I wanted was a quick fix however I soon discovered that it just wasn’t possible.

From here, I only had one choice. To adapt and reshape, or dig a hole and climb into it. My only two semi comfortable positions were standing or lying. Sitting was painful and it felt like I had a ball and chain attached to my neck when I did, so I avoided it at all costs. Within a week, I moved to a stand up desk. I changed the way I moved and the way I got in and out of things. I set my mind on getting better.

I was lucky enough to be able to walk to work. Instead of holding candidate interviews in chairs, I chose nearby places which had high tables and stools and I stood when holding candidate meetings, while they sat. If I had a meeting in a location outside of the office I would lie in the back of one of my team’s car to get from one place to another (thanks PE team, your support was amazing!) as this meant less sitting time, before the meeting time. I even returned many calls while lying on my back to give my feet and legs a rest. I made do and I remained focused at getting better.

After much treatment and commitment to actually ‘listening to the experts’, many changes in habits and a lot of core exercises (yoga and Pilates), the pain started to subside and the sitting became easier. Two years later, I now find myself stronger than I have ever been. The fact that I won’t be able to ever run again doesn’t concern me in the slightest.

My key message to you is if you think you are invincible, it’s time to stop thinking that way. Work on your core, look after your health and make some positive changes today.  Thanks for taking the time to read this and I hope I have hit a chord with you. I can promise you this: you won’t ever regret any changes you make for the better; it’s the changes that you don’t make that you will.